One thing you may be questioning is why Lord Shiva is so often represented as a lingam. Linga basically means a sign or symbol. So the lingam is essentially a symbol of the shapeless universal consciousness of Lord Shiva. “Shiva” also means that in which the creation lies dormant after the annihilation. So, one explanation is that the lingam is a representative of the dormant universal consciousness in which all created things rest after the cosmic annihilation. It also represents the pradhana, the potential but unmanifest ingredients of the material world. Another explanation is that Shiva means auspicious. So the linga is the shapeless symbol for the great god of auspiciousness. It is intended to bring the shapeless unknown into our attention.

The yoni upon which the lingam often sits represents the manifest universal energy. From the unmanifest comes the manifest energy, through which all other things are created. The yoni, which is a symbol of Shakti, combined with the lingam, is a symbol of the eternal union of the paternal and maternal principles, or the positive and negative, or the static and dynamic energies of the Absolute Reality. It is the communion of the eternal consciousness and dynamic power of the Shakti, the source of all actions and changes. It is also the symbol for the creation of the universe through the combination of the active energy of Lord Shiva and his Shakti. This is how Lord Shiva and Durga are considered the parents of the universe. The symbolism of the lingam and yoni also represents the base of the spine, meaning the Muladhara chakra, upon which the kundalini is resting, waiting for awakening.

There are a few versions according to the Puranas of why Shiva is worshiped as a lingam and how this happened, of which I will relate one. There was a great sacrificial ceremony that was going to take place many hundreds of years ago. The great sage Narada Muni was invited to it and asked who would receive the effects of the sacrifice. No one could answer, so the sages who were present asked him who should receive it. Narada said that Sri Vishnu, Brahma, and Shiva were all eligible, but they would have to find out which one had the most patience and purity to be the receiver of the sacrifice. So he chose the great sage Brighu to learn the answer.

Brighu had many mystic powers and was able to travel to the domain of the demigods. So first he went to see Lord Brahma, but Brahma was preoccupied and did not notice Brighu’s presence. Feeling insulted, Brighu cursed Brahma, “You are so proud of your power of creation, you did not notice my arrival. For this you shall have no temples on earth.” Thus, there are very few temples of Brahma on earth. Next, Brighu went to see Shiva in Kailash, but Shiva also did not notice Brighu’s arrival. Brighu, again feeling offended, cursed Shiva to be worshiped only as a lingam on earth. This is the reason why Lord Shiva is primarily represented and worshiped as a lingam on this planet.

Then, to continue the story, Brighu went to see Lord Vishnu, who also did not recognize Brighu’s presence. Brighu was so angered that he went forward and kicked Vishnu’s chest. Lord Vishnu apologized if He had hurt Brighu’s foot and began praising Brighu. Brighu immediately felt pleased and could understand that Vishnu was actually the most qualified to receive the offerings from the sacrifice. However, Lakshmidevi, the goddess of fortune and Lord Vishnu’s wife, was very displeased by Brighu’s action and, therefore, does not bestow much mercy on the brahmanas who, as a result, are often without much money.

To explain the shape of the lingam, a Baana linga is egg-shaped and is meant to show that Ishvara has neither beginning nor end. The Lingobhavamurti is said to be the prime manifestation of the form of the formless, which Shiva is said to have manifested exactly at midnight on Shivaratri. This is why everyone stays up until midnight and then worships that form during the Shivaratri festival. A representation of the Lingobhavamurti can often be found in a niche on the outside wall of the sanctum in any important Shiva temple.

The lingas in the temples are often formed in three parts. The lowest part is the base square called the Brahmabhaga or Brahma-pitha, which represents the creator Brahma. The next part in the middle is the octagonal Vishnubhaga or Vishnu-pitha, which signifies Lord Vishnu the sustainer. Both of these parts form the pedestal. The top cylindrical portion is the Rudrabhaga or Shiva-pitha, which is also called the Pujabhaga since this is the worshipable part. The top portion is also meant to symbolize the projecting flame of fire. This flame also represents the destructive aspects as well as the preserving power of God. 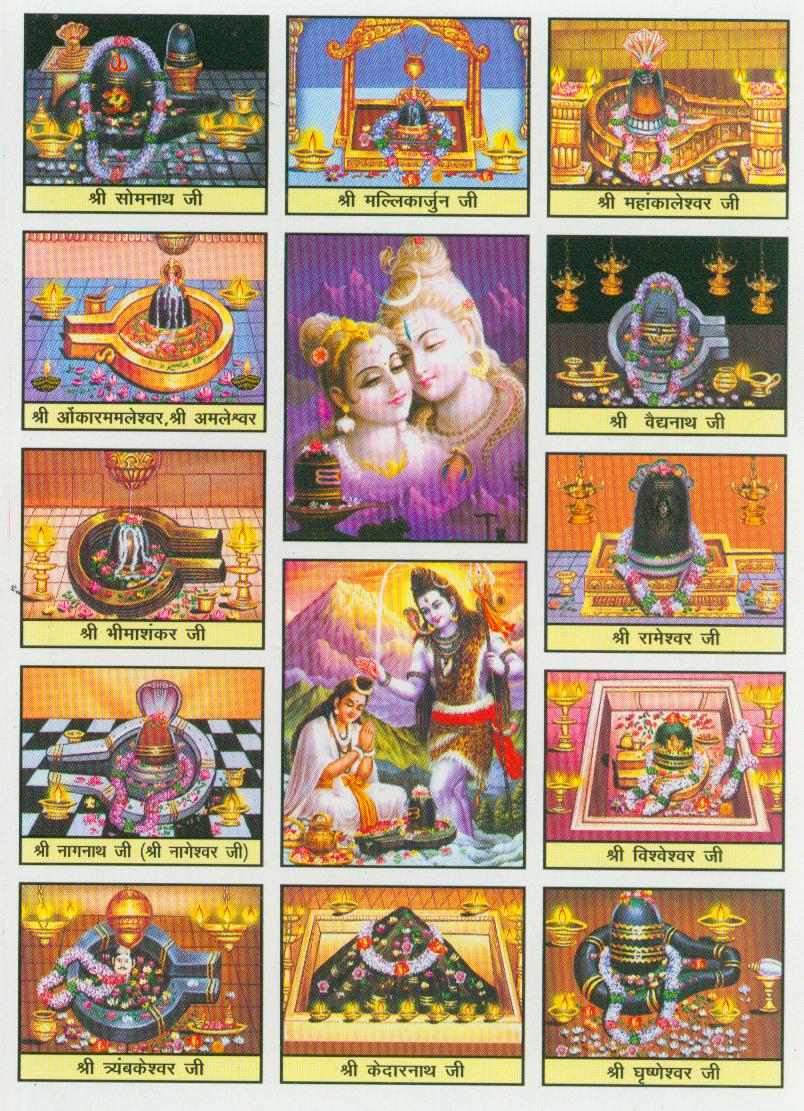 The reason Lord Shiva is often worshiped by pouring Ganges water over the lingam is that it represents the Ganges descending from heaven on to Shiva’s head. The legend is that when the Ganges first began to flow to the earthly planet from the heavenly region, the force of it would have destroyed the earth. To prevent this, Lord Shiva agreed to let the river first fall on his head before forming into a river. It is also explained that when worshipers pour milk or Ganga water on the linga, it represents the pouring of ghee on the sacred fire in the fire ceremony, or yajna. It is the symbolic offering of ourselves to God.

One story in connection with the Shiva linga is found in the Linga Purana. It describes that once Lord Brahma, the god of creation, and Lord Vishnu, the God of protection, engaged in an argument on who was greater. When those two great gods were fighting between themselves, Lord Shiva appeared as a huge pillar of fire that spread across the universe. He told Brahma and Vishnu that whoever finds the head or foot of his form of flame would be considered greater. Then Brahma took the form of a swan and set out to reach the top of the flame. Vishnu took the form of a boar to seek out the foot of the fire. But in spite of their efforts, they could not succeed in finding the limits. They realized their mistake and the peerless greatness of Lord Shiva. This shows how Shiva cannot be approached through ego, but responds with love to those who surrender to him. In this pastime, Lord Shiva appeared in the form of the fiery lingam for their benefit. So they were considered blessed with additional insight for worshiping that oldest form of him. This form of Shiva who appeared from the flame is called Lingodbhava. This story is found in the Shiva Purana and other texts.

This further helps to show how the lingam is not formless nor really a form, but a symbol for the divinity of Lord Shiva. In Sanskrit, linga means “mark”. It is a symbol of Lord Shiva in the same way that large puddles of water are an indication of heavy rains. It is an inference for something else, like the form of that which is formless and omnipotent.