Understanding the Characteristics, Powers and Positions of the Hindu Divinities 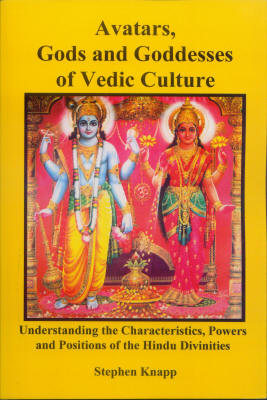 Understanding the assorted Divinities or gods and goddesses of the Vedic or Hindu pantheon is not so difficult as some people seem to think when it is presented simply and effectively. And that is what you will find in this book. This will open you to many of the possibilities and potentials of the Vedic tradition, and show how it has been able to cater to and fulfill the spiritual needs and development of so many people since time immemorial. Here you will find there is something for everyone.

This takes you into the heart of the deep, Vedic spiritual knowledge of how to perceive the Absolute Truth, the Supreme and the various powers and agents of the universal creation. This explains the characteristics and nature of the Vedic Divinities and their purposes, powers, and the ways they influence and affect the natural energies of the universe. It also shows how they can assist us and that blessings from them can help our own spiritual and material development and potentialities, depending on what we need.

Some of the Vedic Divinities that are explained include Lord Krishna, Vishnu, Their main avatars and expansions, along with Brahma, Shiva, Ganesh, Murugan, Surya, Hanuman, as well as the goddesses of Sri Radha, Durga, Sarasvati, Lakshmi, and others. This also presents explanations of their names, attributes, dress, weapons, instruments, the meaning of the Shiva lingam, and some of the legends and stories that are connected with them. This will certainly give you a new insight into the expansive nature of the Vedic tradition.

COVER PHOTO: A print of Lord Narayana (Vishnu) and Goddess Lakshmi (the Goddess of Fortune). Lord Vishnu, in His bluish complexion, holds His mace, disc or Sudarshan chakra, a conch shell, and a lotus. Lakshmi holds two lotus flowers and blessings. The Om is in the center. (This print is from the author’s personal collection.)

Numerous color prints and photographs of the various Vedic Divinities can be seen, downloaded or printed for your perusal, meditation or use from the author’s website at: www.stephen-knapp.com.

CHAPTER ONE
WHY SO MANY GODS?
Two Ways to View the Vedic Divinities

APPENDIX ONE
SRI CAITANYA MAHAPRABHU: THE MOST RECENT AVATAR

APPENDIX TWO
THE SIGNIFICANCE OF DEITIES AND DEITY WORSHIP

APPENDIX THREE
DEITY WORSHIP FROM THOUSANDS OF YEARS AGO

E-BOOK VERSION from LULU.COM for $7.00 can be downloaded from www.lulu.com, or see all of Stephen's books offered in pdf format at: https://www.lulu.com/search?adult_audience_rating=00&page=1&pageSize=10&q=Stephen+Knapp

THE INDIA EDITION by Jaico Publishing in Mumbai, available at: http://www.jaicobooks.com/j/j_searchtry.asp?selcat=title&keyword=Hindu+Gods+%26+Goddesses for Rs. 225, under the title of HINDU GODS & GODDESSES.